Okay, so when I last left off I was packing up the car and getting ready to go in search of the coffee shop. Boyfriend was happily going to the top of the mountain, sliding down, and going back up again. And again. Yawn.

I had my resort map and I had my eye on a coffee shop called Java Joe's. I walked this way. I walked that way. I went up some stairs. I went down some stairs. This godforsaken coffee shop was no where to be found. I wandered around muttering under my breath about how much I hated this place, and how all the people there sucked, and why couldn't they just go to the beach like normal people?

I went into one of the hotels and asked the kid at the desk. "Oh sure!" he said, "Just go up these stairs and it's right on that side of the hotel." Well okay! Now we're getting somewhere! I went up the stairs, and all that was up there was a door outside, a conference room, and the elevator. So I rode the elevator up and down a few times in frustration. Then I went out the back door of the hotel, wandered around a corner, and behold! Java Joe's. Why didn't he say GO OUTSIDE?! Idiot.

Anyway, it was a hippy dippy little coffee shop where I had an EXCELLENT bagel and latte, so all was not lost. Plus once I had some food and coffee in me I was feeling much more cheerful. I hung out there for awhile then met Boyfriend for drinks and lunch. After that he was heading back up the mountain (so he could slide down again) and I went in search of the snowshoeing.

I drove down a long dirt road to a deserted looking building and actually got out of my car and went inside. Who am I? I was apparently bored enough that I wanted to go snowshoeing rather than sit in the car and read. So I rent my snowshoes, the guy gives me a map, says all the trails are marked, and I head out. 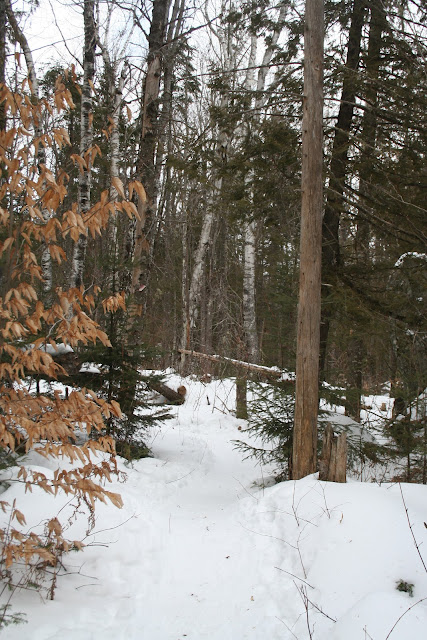 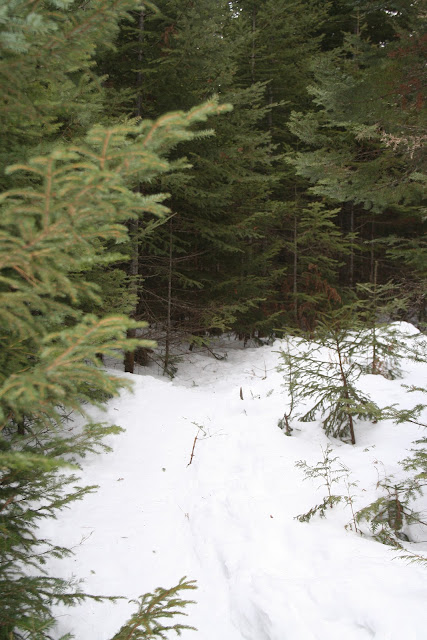 I picked a trail that was supposed to take two hours to complete, knowing that's how much time I had to kill before Boyfriend was done going up the mountain and sliding back down again. I tramped into the woods, in my cute snowshoeing outfit with my camera in tow.

"This is great! Look at me, getting in a workout and some fresh mountain air!" Then 30 minutes went by.

"Oh my God, I'm so lonely and bored. It's just me and the squirrels out here. I guess I should take some pictures of myself to remember this by." [here's a story, of a lovely lady, who went snowshoeing all by hersellffff]

Then 45 more minutes went by. I'm DEEP in the woods now. Things are getting treacherous. The path is leading me through streams and I really didn't want to get my fancy snow boots wet. [danger lurks at every turn!]

Then I started wondering where the hell I was. I'd been hiking through the woods for awhile. I was sweaty. I was starting to panic. This is when I realized the path I was on didn't quite loop all the way back to the snowshoe lodge like I'd thought. It seemed to end at an intersection with a cross country skiing path. I just figured I'd trudge up that a little ways and be back.

So when I popped out onto a ski path with a sign that said LODGE: THIS WAY, I followed it. And followed it. And followed it. There were no more signs directing me to the lodge. The only signs were ones with pictures of a DeLorean or a moose. I think the DeLorean was supposed to be a snowmobile. The moose is what really freaked me out. THERE COULD BE A MOOSE IN THE WOODS WITH ME. TO EAT ME. Obviously. Then I had a short fantasy of me meeting a moose and being a moose whisperer and having it follow me home to the delight-slash-awe of my friends and family. [I was too distraught to take a picture of the moose sign. Here is a bridge thing.]

At this point I was beginning to panic. I was at a fork in the road where I had three possible path choices and nothing to tell me which way to go. I was texting my friends in a panic. The battery on my cell phone was dying. Boyfriend unhelpfully suggested I just backtrack. Yeah, backtrack two hours through the woods? No thanks. Someone send a search helicopter! Or search DeLorean, I don't know what you mountain people use for rescues out here.

Then, luckily for me, someone came skiing out of the forest. The first person I'd seen the whole time. I begged him to tell me how to get to the lodge (it wasn't far, hooray!) and he looked at me like I was a crazy person. I don't know why. He was the one cross country skiing in man leggings. I was just clutching a cell phone in a bejeweled case, wearing designer sunglasses, and snowshoeing down a ski trail. What's the big deal?

Anyway, I made it back safely and Boyfriend and I hit the road to head home. The highlight of the drive home was stopping at  what Boyfriend calls a "Colonel Sanchez",  which is a drive thru where one can get BOTH KFC and Taco Bell, just in case you felt like being extra disgusting (which we did, obv).

I'm thinking next year we can go to a cozy bed and breakfast. Where I can sit. And read.

Seek & You Will Find

i pledge to read the written word